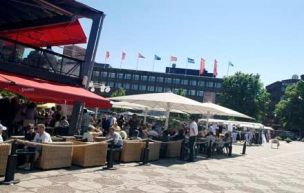 Gävle Kommun is a municipality in east central Sweden with a leading role in renewable energy and land information, being the home to Lantmäteriet, the Swedish National Land Administration and mapping agency.

Closely related to Gavle Energi, The municipality has adopted Weave for the integration of several IT systems and the dissemination of their information.

The City started its Weave deployment by with property, population and address information (the basedata used by all users) and with the first users being the building permit area, where new functions and custom reports were rapidly configured to satisfy immediate business demands.

The next step in the system rollout is to replace a legacy system.

Gävle Kommun is closely related to Gävle Energi, the local energy provider, and has also built a modular configuration in Weave, so Gävle Energi can just plug in their specific configuration and use the same infrastructure for its needs. A common hierarchical security strategy in four levels 1)Public, 2)domain 3)department and 4)sub department was implemented to support all components of the municipal organisation.

The City is implementing the Weave technology through Cohga’s business partner Viamap.